Winning Election Can Be Easy! 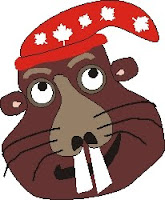 Every single beaver I meet says the same things.

"We have to vote for one party or another, but none of them care what I seriously think about." or

"We all know what is wrong, but none of the parties have the courage to do it!" or

"They really shouldn't be criticizing each other's character in the mass media. It just isn't Canadian! "

"Every time an election comes, I have to vote for what I think is the party that will do the least damage... not the most benefit for Canada."

Well let me tell you what every single beaver is thinking:

So, there you have it! The secret to winning an electoral majority is to show Canadian beavers how they will stop the public sector union army.

The Canadian Federalist Party is not afraid of the public sector unions. In fact, it respects them for what they have done for their members. The private sector has fallen way behind in taking care of its members. But the CFP will devise programmes to even the playing field between both sector's workers.

Once this is accomplished, Canada will have plenty of its own capital to re-build our nation.

Meanwhile, we are most likley heading into another minority government. Unfortunately, it also means that the gap between the public and private sector beavers will continue to widen.

I just hope us beavers can find a tree big enough to cross this widening gap.