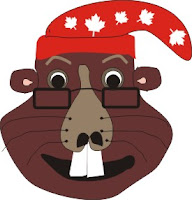 Four Federal elections in seven years says a lot to us worn out Beavers about present day Canada. Perhaps the strongest message is that none of the national political parties appeal to a significant number of us. We are fed up with their false promises, their corrupt practices and their constant bickering!

At the CFP website you can click on "links" at the top and visit their websites. Wow - what a bunch of motherhoods and malarky?

And then the Liberal slogan is "Putting an end to waste". Well I'll tell you, I've smelled some "ends" that don't stink as much as their election platform. Having this election is a gigantic "waste" so what the heck do they mean? If you see the number of times they mention Big Beaver "Harper", it is obvious they can't think for themselves... they can only criticize someone else... These aren't acceptable values or credentials to get any beaver's vote.

And the New Democrats have a slogan of "Practical First Steps". Sounds a bit like they can only take "Baby Steps". They do seem to make a few promises that will appeal to the majority of Beavers, but they don't have a mature enough vision to make changes without sinking the canoe.

I'll tell you, it is sure frustrating to have to be patient until we can officially afford to launch the CFP as a serious political contender. In the meantime, I hope some "federalist" beavers will stand up and become independent candidates. Canadians need a real choice and none of these old, worn out, americanized "copy cat" parties have earned any respect by the voters.

I'm amazed how many concerned beavers have decided to boycott this election. Perhaps the final voter turnout will give us a true idea of how many beavers have been brainwashed by media hype.

The Canadian media crows love an election because they will have 6 weeks of "news" stories. But don't expect them to dig down to the grass roots to discover what most of us really think.

I was hoping to put my snowshovel away... but it looks like I'll be needing it to shovel a growing mound of c..p!

Well, keep your head to the stump!