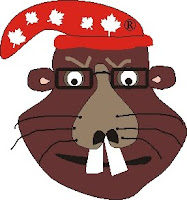 These politicians might just as well slither around and hand eveyone $2000 to vote for them. They are making about $36 billion in election promises to the 18 million voters that they have no ability to pay!

In fact, they will have to tax us back the $36 billion they are promising to give us.

Perhaps Canada needs to change Halloween to May 2? The goodies they are promising to freely give us would make any poor beaver drool down his chin.

The Liberal Party has promised $4000 per university or college student to be applied to their tuition. Now if that isn't a vote purchasing game, I don't know what is!

The NDP Party has targetted the Senior beaver vote with "protection" of pensions... not major increases. They are running on a "feel secure" platform that lacks substance to most voters.

And the Green Party, will raise corporate taxes and thus eliminate any possibility of generating capital to invest in new jobs. Now there is a really dumb move!

Let's face the fact that Canada's official political parties just don't see the big picture. Canadian families don't give a darn about all these payouts to other segments of society. Canadian families want a clear vision of where Canada is going and what opportunities there will be for their kids.

Canadians want a long term Vision for Canada that provides a fair distribution of our natural and economic wealth. They want to see the way Canada will utilize all the new technologies to make this country the most successful nation in the world. They want to see how we will establish a culture where individual effort and merit is rewarded regardless of social status, cultural heritage or nepotism. They want political leadership with a clear understanding of how to change our country's course without job losses and investment retreats.

Canadians want a party that doesn't exist yet! They want a CFP - Canadian Federalist Party. But they don't even know it already exists in a virtual website. Hey, maybe it is time for us beavers to start slapping our tails on the waters of this country to get the message out?

Maybe you can send a birchbark letter to your friends and relatives to check out: www.canadianfederalistparty.com ?

Man, the silence in this wilderness is driving me nuts. The sad call of the loons seems to indicate that most Canadian beavers have fallen asleep.

Hey, it's time to start slapping your tails on the water!