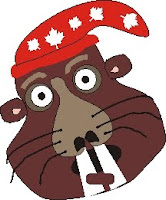 Well I'll tell you there were a lot of wet pants beavers when the yankee doodles scored in the last seconds of the biggest hockey game of this century. But, Superbeaver, Sidney Crosby, lifted our sagging Canadian spirits through the clouds on Gold Sunday, at the 2010 Olympics in Vancouver.
Canadian nationalism has finally broken out of the closet. Following years of political embarassment, and international disinterest, Canadian beavers got our days in the spotlight. Even Canadian beaver athletes who won secondary or no medals at all became Canadian heros during these Olympic Games. Legends were born.
Perhaps one of the more telling stories was the low profile of our political party leaders throughout the games. Our apparently bookish prime minister wasn't even mentioned as the cameraman focussed on him and Wayne Gretsky at a hockey game. Later the camera did focus on the PM doing rather awkward and stiff "high-fives" with reluctant spectators sitting nearby. The charisma of ordinary Canadians, winning or even losing medals, far excelled the spontaneity or leadership attributes of our PM.
Mr. Harper may be a mastermind of politics, but I don't think Canadian beavers would follow him onto the ice, never mind into a real battle.
Did you see the media scramble to recognize our nationalistic spirit? Hey guys -where have you been living? Canadians have always had a very deep seated nationalism. It has been your tactics of putting down every one who isn't a celebrity, or member of the media, that has made us bury our feelings below the water line.

Did you see Lloyd Robertson make his "revelation" that we do indeed have a nationalistic spirit? Duh - Lloyd, you have been watching yourself too much on TV! Did you notice his patronizing manner of handing over a piece of his broadcasting mantle to Brian Williams? Unfortunately, Canadian media has assumed an elitist role in our country and Canadians find them out-of-order and presumptuous.
Hopefully, this Olympic games will encourage our media to stop interviewing each other and start getting to meet and discover real Canadians and their values, beliefs and common sense.
Now that we are all back to work, and have got our feet firmly back on the ground, I'm hoping there are lots of Beavers out there who want to change the politics of this country.
The CFP, Canadian Federalist Party, is launching its' virtual web site this month at: http://www.canadianfederalistparty.com/ . Remember to check it out and get involved.
Hey Canada - "We Believe" - How about you?