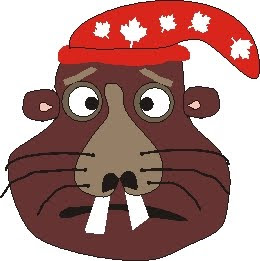 With all the smoke and mirrors, we can't help but be choked by this new federal budget.

With 33 blatant and generalized nice sounding "motherhood" statements in the Throne Speach, the 2010 Budget intoduced the next day in parliament served up more pablum than a 20 pound baby beaver could eat.

The only positive note was that the Conservatives are finally increasing their estimated budget deficits to the levels the CFP - Canadian Federalist Party forecast 12 month's ago.

Basically, we have no one holding the tiller on our ship of state as it is swamped by the international and US based monetary scandal.

The tricky language used by the political "spin-men" and government bureaucrats says things like "There will be a $3.2 billion personal income tax relief." What they mean to say is that since unemployment is going up, and EI is running out for hundreds of thousands of beavers, and since people are being transferred into contract jobs instead of full-time jobs, then incomes of the 17.5 million taxpayers are going down, so they will collect $3.2 billion less personal tax.

But since the new HST will baloon "provincial" revenues, the federal wing of the party has nothing to say.

The military cost reduction sounds nice financially, but it is merely a preposterous self-gratification and self-serving numbers game where the government takes credit for cutting the military budget increase from 8% a year to 4% a year. Duh, if you aint got the money, how can you take credit for not spending more?

Even the bureaucracy savings they mention are pure gass from under their beaver tails. The public sector is still guaranteed a 1.5% pay raise each year, while the rest of us in the private sector lose jobs by the thousands, take pay cuts, and take lower paying jobs!

But the thing you didn't see in the Budget, or in mainstream media, is the debt each taxpayer is accumulating. Before the recession, each taxpayer was responsible for $26,500 of the federal debt.(I haven't looked up the provincial debt load yet.) With these recession budgets, in three more years our debt will grow $9000 each, to a whopping $35,500!

Government debt will soon cost $41 billion in interest payments each year and interest rates are bound to rise 50% during this same period.

The tragedy of all this is that the government knows they are going to plunge us further and further into debt until at least 2015. The plans they have come up with do not make any sense in the short or long term. The have no idea how to discipline our spending and begin investing where it will have the greatest positive impact upon the growth of our economy!

There is a naive misunderstanding that our middle classes will bail them out sometime in the future, and provide an unending growth in prosperity for government workers regardless of our economic health.

In spite of numerous missives directly to our political and government leaders, with solid recommendations on how to help grow the wealth of our middle classes, they are blindly drifting towards the waterfall.

You and I and everyone else with an iota of "common sense" knows that our country will prosper as the middle class prospers. We need to stop growing government, let it shrink quite a bit, and start helping the middle classes to get out of debt.

Keep your tails in the water!