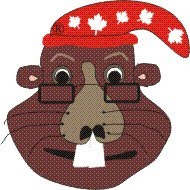 In January 2010, Canada's dysfunctional parliament was shut down until after the Winter Olympic Games. This was apparently a wise move by Primus Beaverus, Stevie Harper, as the bungling Liberal opposition was about to trip onto an election beaver -trap.
The Conservatives were smart to close the lodge doors because they had run out of ideas for legislation that would turn around the economy that would make the bureaucrats and the establishement richer. The only policies left would help the poor and increase the size and wealth of the middle classes.
Also, after the possible Canadian mania and frenzy over winning a Gold medal at home during the Olympics, the Conservatives will be able to brag and boast how they made it happen. They will then be ready for an election.
By the way. Bob the Beaver sent a 16 page macro-economic report to all the party leaders last February. He pointed out on page 15 that the deficit would exceed $50 billion, not the $27 billion the government was telling people in January. Low and behold, in June the government admitted the deficit would exceed $50 billion in 2009.
Bob has been working hard to create Canada's first "Virtual" political party, the CFP - Canadian Federalist Party. The new website: www.canadianfederalistparty.com should be on-line right after the Olympics.
This is a "grass-roots" party representing average nationalistic Canadians who will be able to provide all sorts of input to the party's policies and discussion papers.
Hopefully, there will be enough members to officially register the CFP in 2012 and even run candidates by 2015. Don't worry about the long start-up, as this is actually a very serious project with a vision for Canada over the next 100 years!
The CFP is a party for this century, but it will take some time to overthrow the firmly entrenched old parties.
If you like what you are hearing, then be sure to let your social network in on this revolutionary new concept for Canada's future. Canadians can now have realistic hopes for our future, and the future of our kids and grandchildren. The job has begun!
Don't chew on the deadwood!
Bob the Beaver
Posted by Bob the Beaver at 12:20 PM