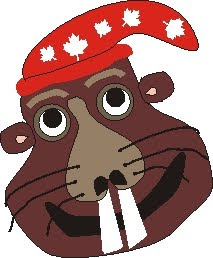 (Bob the Beaver is excited about the official launch of the CFP - Canadian Federalist Party on Canada Day - July 1, 2010. Bob will be celebrating by travelling down Ontario's beautiful Madawaska River.)

Downtown Toronto is damned up like an over-populated lily pond as the G20 political leaders search for floating logs as they drown in debt.

In fact, about all they are expected to accomplish is to eat and drink so much that they will get stomach cramps and drown themselves. They just don't seem to realize that the solution to the global economic mess rests with China and the USA.

The fact that $trillions have been stuffed into the global economy will not make things more viable. Money has value when it is scarce - not when it is plentiful. There is an unlimited supply of electrons pretending they are money in the global banking and financial systems. At present, the number of electrons held by each country has mushroomed out of control and a new balance is needed.

The most significant balance is between China and the USA. Once they work out a balanced currency relationship, then everyone else can line up with them.

The USA needs to increase its' exports by having a cheap dollar value for its' goods and services. But to export stuff, it needs to make stuff the rest of the world wants. They haven't figured this part of the puzzle out yet, so their economy is not going in the right direction yet. This could take another 3 to 5 years.

China's problem is that they need to buy foreign natural resources. They need their currency to go up so that they can get more goods for their Yuan. While they held $trillions of over-valued $USA, they bought up vast tracts of natural resources and land all over the world. But now that this money has been spent, they need a new plan to balance trade with the USA.

Once these two countries find a workable balance, then the rest of the world's economies can get back into the game. Unfortunately, the Euro currency countries won't have much say and will have to wait for the giants plus emerging economies like India to get their economies rolling again.

During the next five years, Canadians should be taking stock of what we have and plan for our future in this century. Us beavers have been diligently doing this planning as you can see at the CFP - Canadian Federalist Party website at http://www.canadianfederalistparty.com/ .

Keep you heads above water!